I need to cut about 1000 pieces of wire of about the same length (5.5cm). So I built this “quick and dirty” contraption to do the job for me:

I’m not sure if it would have been faster to cut them by hand, but it definitely wouldn’t have been so much fun. Also, I doubt that cutting the wire manually would result in such nice uniform lengths. Finally, I might need even more wires in the future and I know I’ll be very happy to be able to pull this thing out of the junk box again.

The wire feed and the cutter action are both driven by their own DC motor (RB350050-0A101R gear motor). The motors are driven by an Adafruit Motor shield, I found in my parts box. The shield (and the motors) are powered with 12V from my lab power supply.

The cutter action has one end stop for the “open” state. When cutting the wire, the motor pulls the upper grip down for a “hand tuned” amount of time and then opens the cutter again by running backwards until the end stop is reached. The feeder motor is driven for a fixed amount of time with no feedback loop at all. The rollers on the wire feed are cut pieces of a plastic wine cork…

The whole thing is controlled by an Arudino Duemillenove with a little Arduino sketch, using the Adafruit library for the motor shield: Guess what their first print was…

Funny. In The Big Bang Theory’s “The Cooper/Kripke Inversion” episode last week, Howard and Raj bought a 3D printer. Guess what their first print was…   A whistle :) 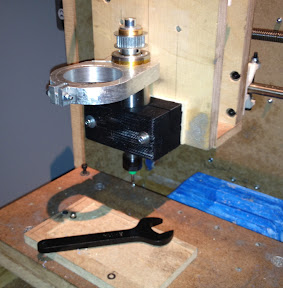 I’m still working on the final spindle (motor) for the Pleasant Mill.

As mentioned before, the Dremel as spindle motor works more or less fine, but it’s way too loud for my ears! That’s why I bought a big-ass brushless motor back in mid-2011 as kickoff for a new, self-made spindle.

So the build began:

I bought a piece of V2A steel stock on ebay and machined the spindle body on my lathe. It was the first time for me to machine steel. Definitely a whole different deal than the aluminum and brass stock I work with normally…

The main work was to drill the 17mm through boring into the V2A. Here’re the tools I used for this job (from left to right): 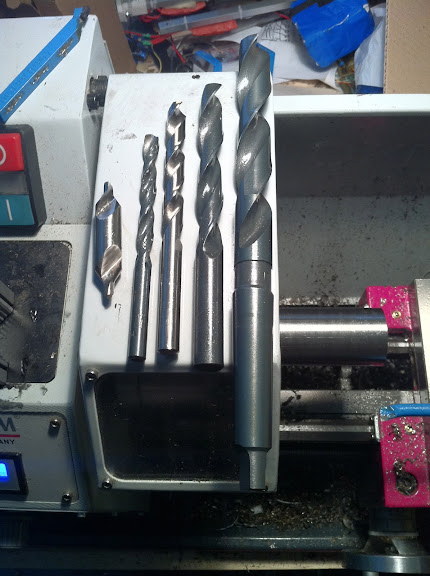 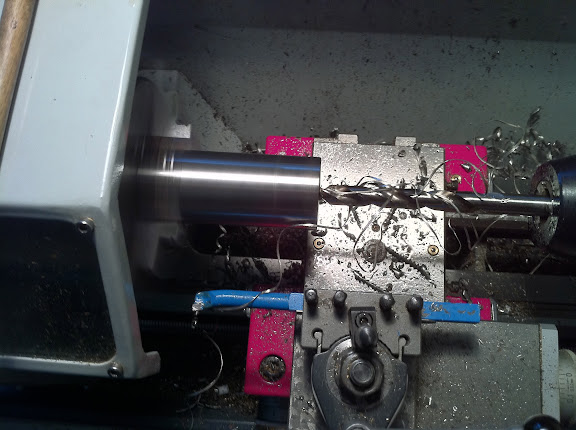 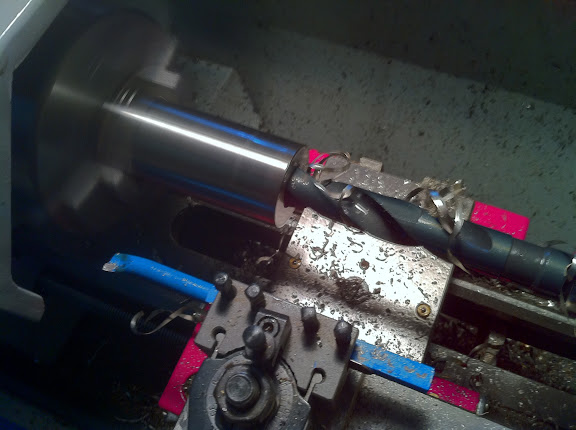 After the tough job of drilling the hole, the bearing seats were machined with the boring bar: 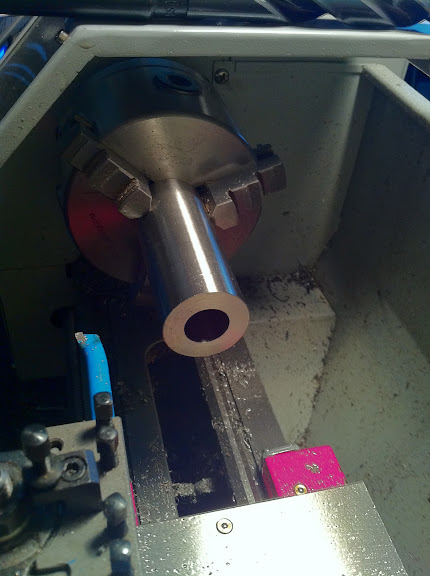 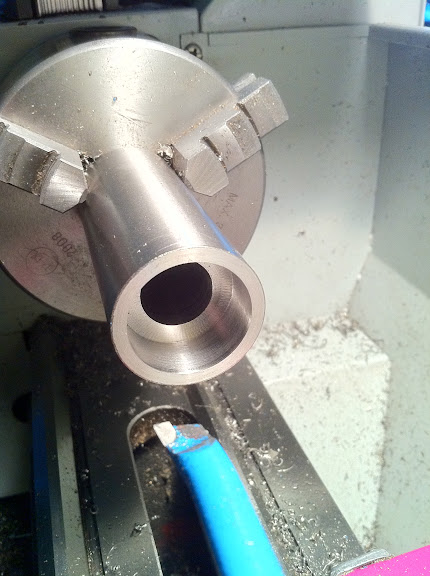 I hadn’t a thread cutter tool for machining inner 19mm fine pitch threads a the time. So I paused the project until the ordered tools were delivered… 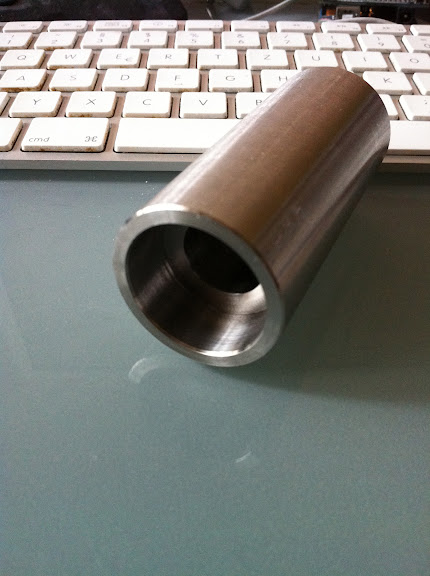 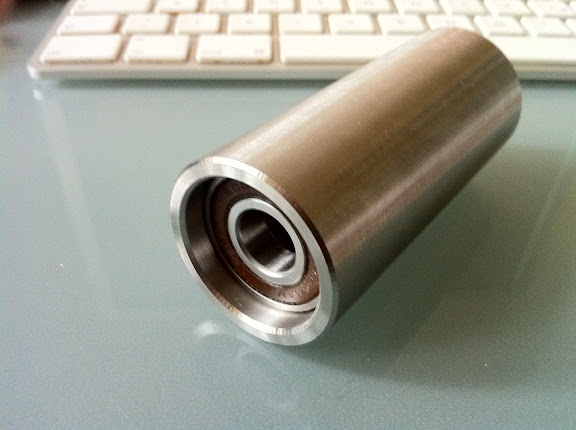 And that’s my trash can after boring the V2A stock: 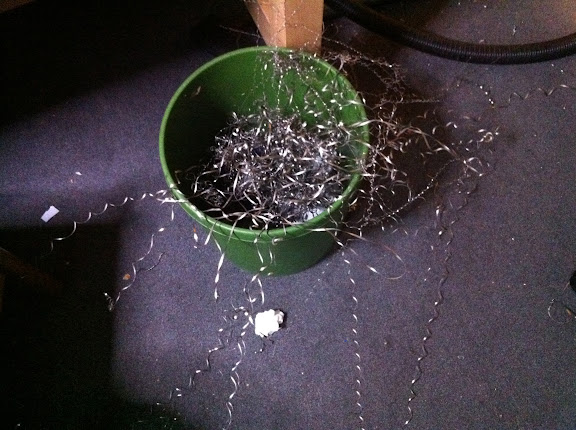 A week later or so, the thread cutting tool arrived. Here’s the spindle housing with the fine pitch thread. The threaded ring later holds the bearing in place. It’s made out of aluminum. 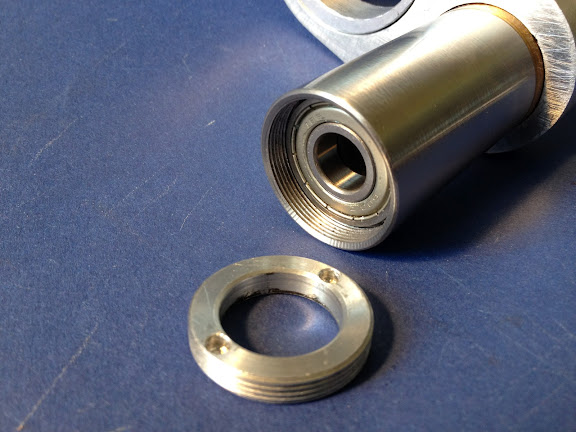 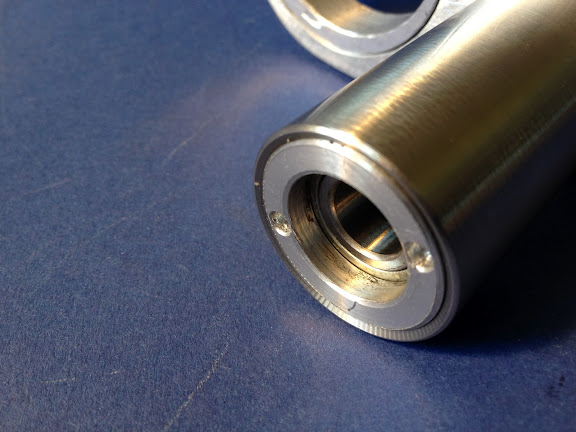 The rest of the assembly.  I bought the ER11 100mm spindle on ebay. The only modification was the flattening at it’s end for fastening the timing wheel with the set screw.

The distance rings were machined out of brass by me. The timing wheel’s center hole was re-bored to fit on the spindle shaft and a set screw was added. 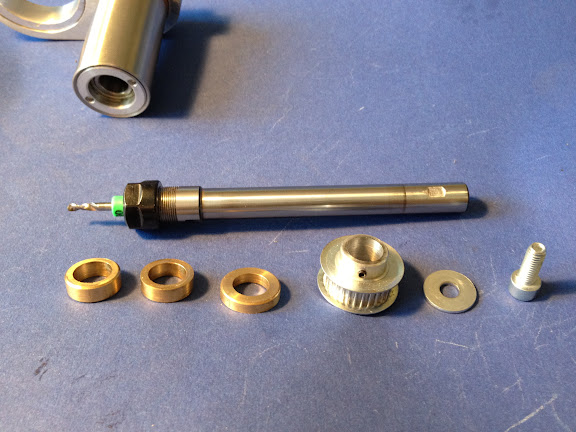 Here’s the lower part of the spindle after assembly. The lower brass distance ring is also visible: 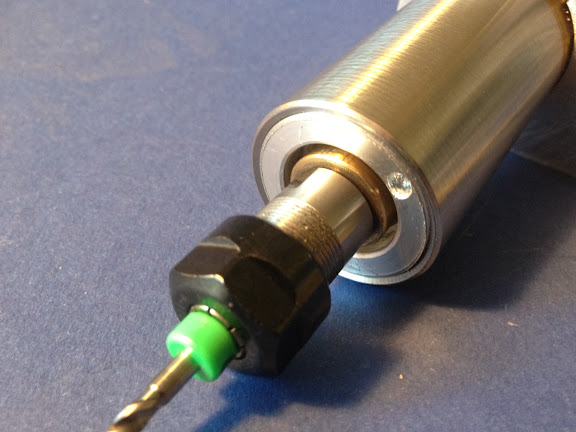 And the upper part of the assembly. Again, a brass distance ring sits between ball bearing and the rest of the assembly: timing wheel, another brass spacer and finally a washer and a bolt. The spacer and bold are for adding some pretension (“Vorspannung”, not sure if this is the correct word for it in English) on the bearings. 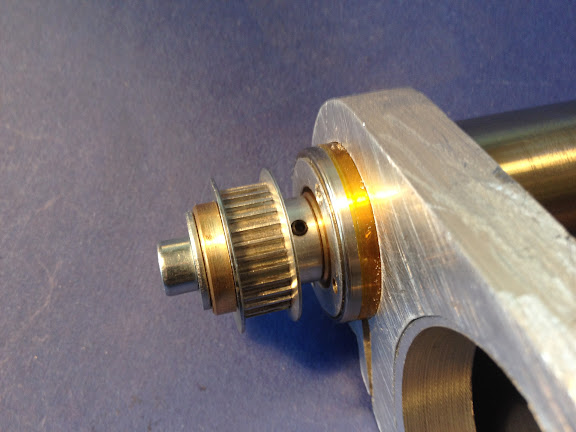 Finally, I machined an eccentric ring for mounting the motor in the retainer clamp. By rotating the eccentric ring, the disance between spindle and motor axis can be varied by some mm to adjust the tension of the timing belt. 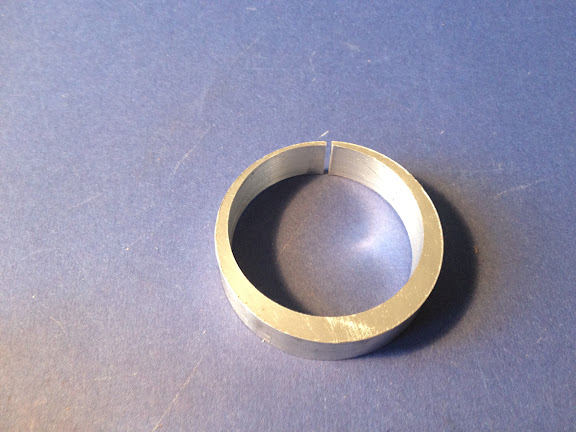 I’m not particularly proud of the retainer clamp itself. I tried to build it from 10mm sheet aluminum without proper tools. This resulted kind of a “substandard” piece on the whole assembly. As soon as I can get access to the proper tools, I’ll build a better, cleaner version of the clamp… 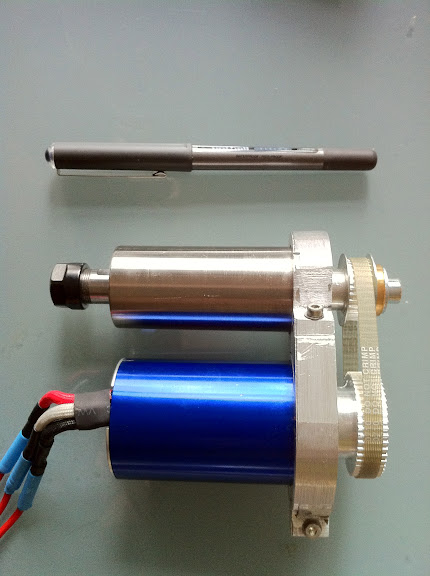 The motor is most likely oversized for this. But i thought it would be a good idea to run motor and speed controller (ESC) way under their ratings in order to run both for much longer time as they usually do in their RC world habitat.

And then the real problems start: How to run such a motor not from LiPo batteries but from a power supply?! I read all kinds of warnings on this in the internet. There were some guys, saying it would be ok to simply connect a brushless motor with it’s ESC to a power supply, but a lot other guys saying that the power supply won’t last for long.

Since I didn’t want to blow up my high current power supply by connecting an RC world ESC to it, and also since I read, that running a brushless motor without hall sensors won’t work very well with quick changing loads on the motor, I started to develop my own brushless speed controller, using three hall sensors I added to the motor’s housing for closed loop operation. The power stage is driven by an Arduino. I’ll write some more details on this in my next post.

Meanwhile I bought a smaller brushed DC motor on ebay. This motor has a rotary encoder already mounted to it’s end, so I thought, it would be nice to try some PID speed controlled spindle driving with it.

One problem was, that the motor’s spindle has a diameter of only 4mm while the timing wheels all have a 6mm center hole. So I machined a special spindle adapter out of brass: 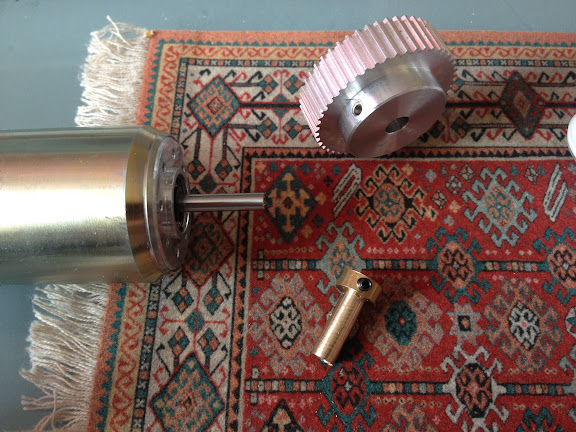 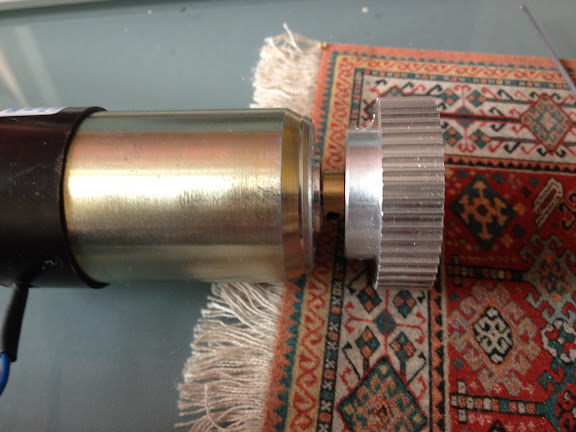 I also needed a second eccentric ring for the motor retainer: 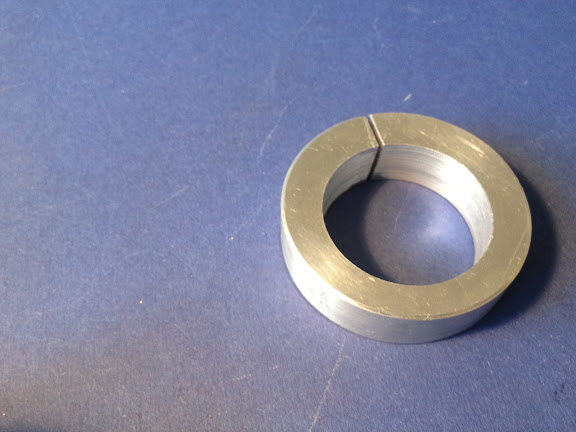 With the new DC motor I was finally able to use the spindle for the first time. It worked well and was considerably quieter than using a Dremel as spindle motor.

However, the brushed DC motor is definitely too weak for the job. I used it to drill holes in a PCB, but only for the smaller drills. Drilling the 3mm mounting holes in the corners of the PCB failed (the spindle simply stopped…).

Here’s a video of the brushed DC spindle in action. The video also compares the sound level of my former Dremel spindle to the new spindle:

I’m still working on the final spindle (motor) for the Pleasant Mill. As mentioned before, the Dremel as spindle motor works more or less fine, but it’s way too loud...