As you might guess from the version number, this firmware isn’t finished yet and probably still has some bugs to fix (help’s highly appreciated, BTW :).

As mentioned before, I use a Seeduino Mega and some Pololu A4983 stepper motor drivers.

One recent addition on the hardware side was a 24V/6.3A power supply. I also glued some small heat sinks on the A4983 chips.

Then I increased the current to 1.68A, the max current, the stepper motors (SY42STH47-1684B) are rated for. Driving the steppers at 24V/1.68A enabled me to dramatically increase the top feedrate for the machine (about 1800mm/min instead 600mm/min). Unfortunately, the little heat sinks weren’t enough and the thermal shutdown of the A4983 kicked in after a few minutes. So I had to lower the current to about 1.2A again (and the max feedrate to 1100mm/min).

As you can see in the image at the top of this page, I’m still using a messy bread board for the electronics. As soon as I have the feeling to know the main issues with the whole shebang, I’ll build some kind of Seeeduino Mega shield, of course.

Right now, I plan to put the stepper motor drivers on a separate daughter PCB, somehow integrated in some kind of big ass heat sink.

If anyone knows a good way to cool the tiny A4983 chips on the Pololu breakout boards, please let me know!

The drilling cycle commands also recognize the L (loop) parmeter, which is nice to drill multiple holes in a row. Just switch to incremental positioning (G91) and use something like G81 X10 Y0 Z-12 R1 L7 to drill 7 holes along Y=0mm, 10mm apart and 12mm deep. Don’t forget to switch back to absolute positioning (G90) after :)

I also added the M6 (tool change) command. Of course, I have no automatic tool changer (and I don’t really plan to build one). On the Pleasant Mill, the M6 command pauses the G-code processing and displays a message on the LCD, containing the tool number, requested by the G-code program and waiting for feedback from the operator.

For example, the line 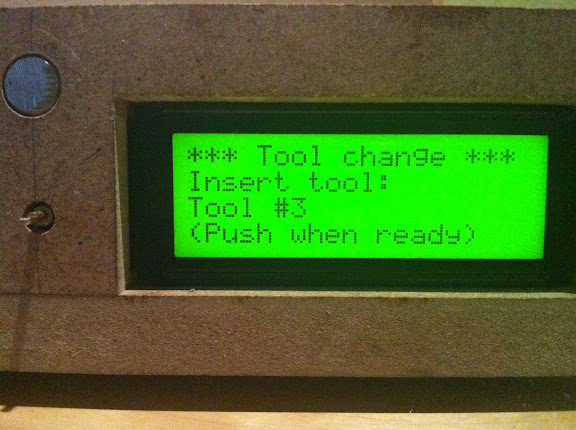 I even wrote some code to save a “tool database” in the Seeeduino’s EEPROM, so the LCD would say something like “Insert tool: 3mm drill bit”, but this code doesn’t work properly yet.

Both, the drilling cycles and the tool change command are showed off in the following video:

And here’s the G-code, I sent to the machine during the video:

I also implemented the commands G54 to G59. Each of these commands switches the machine to one of 6 “work coordinate systems” (WCSs). These are 6 user defined “zero positions”, saved in the machines EEPROM.

To define a WCS, use the “Jog XZ”, “Jog Z” and “Jog AB” functions in the mill’s UI (“Cartesian”) to move to the desired position. Then choose the menu command “Set WCS” to save this position in the EEPROM. You also can view already saved positions with the “Show WCS” command.

When writing G-code, you can then use one of the commands G54 to G59 to load the previously saved positions as zero positions.

In order to get the whole WCS stuff working, you need to “home” the machine once (either by sending the G28 command or by choosing “Find home” from the Cartesian menu in the UI). This is necessary to give the firmware an idea of the machine’s absolute zero position. If you try to save a WCS position in the UI or to use G54 to G59 without homing, an error is displayed.

I just published v0.4 of Pleasant Mill‘s firmware on Github yesterday: https://github.com/zaggo/PleasantMill As you might guess from the version number, this firmware isn’t finished yet and probably still has some...