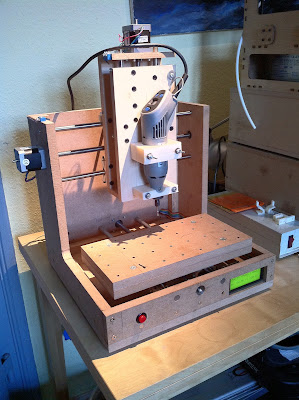 I know, a CNC mill ain’t a laser cutter. But it’s as close as it gets for me in the foreseen future.

Don’t get me wrong, I’m still happy with printing 3D stuff in plastic. As matter of fact, I used far more printed parts during the build of my new CNC mill than I had planned in the beginning. But there are quite some situations, when printed plastic just isn’t the best choice material for an object.

That’s where usually laser cutters, plasma torches and water jets come in. Or, in case of a poor, lone DIY warrior, a home made CNC mill.

I looked for an open source CNC machine which would be able to mill wood (mostly plywood and MDF), acrylic and maybe even aluminum.

The internet is full of DIY CNC mills, but only a few people publish plans and/or enough technical data. There are some kits, but I didn’t want buy a kit, since I already had many parts for a CNC mill lying around (high torque stepper motors and Pololu A4983 motor drivers from a dead end project of mine, waiting for recycling, a bunch of precision rods from old scanners and printers). Also I love to plan and build stuff by myself. 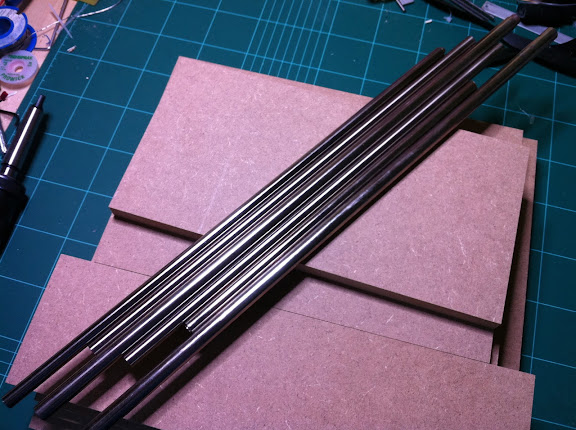 Eventually I stumbled upon the website of the Mantis CNC mill. This mill is open source and kits are available for sale.

I liked the compact size and use of wood for the main construction. However, there are several things, I don’t like:

That said, I used the Mantis plans as base for my own, custom plans.

I slightly scaled the parts up and “rounded” them to the next metric measure. The 10″x4″ build platform became a 300 x 150 mm build platform and so on.

In order to keep track of the changed parts and the construction as a whole, I constructed the machine in a 3D application: 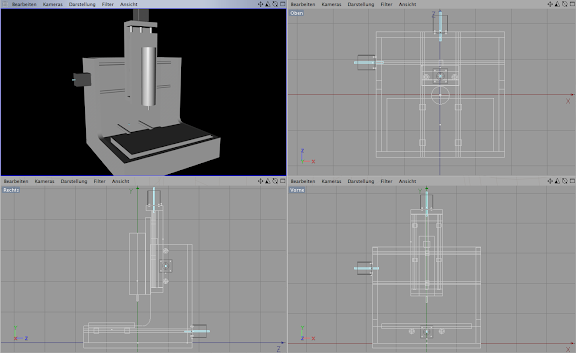 Based on my 3D drawing, I wrote a BOM for the wooden parts. I use 16mm MDF and the whole material cost less than 10€ in my local hardware store (already cut to size). 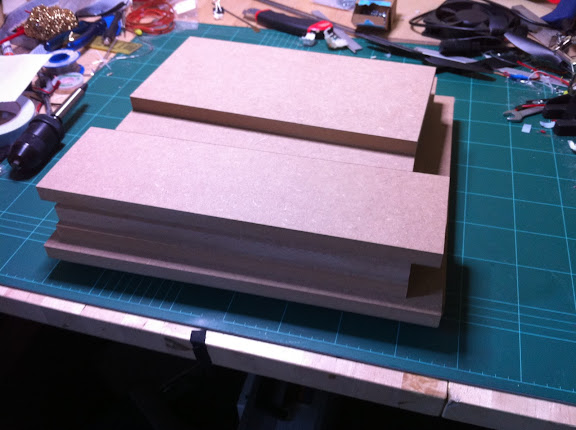 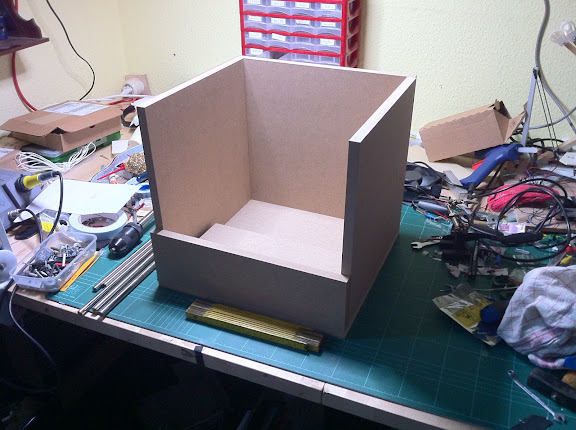 Here are some pictures from the build process. Building a LCD (and a micro joystick switch) directly into the machine was part of the plan from the beginning. 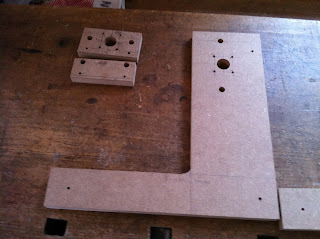 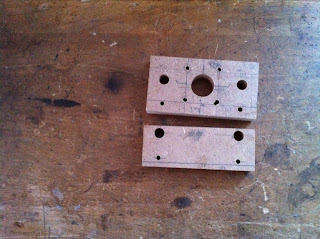 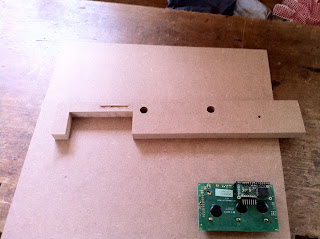 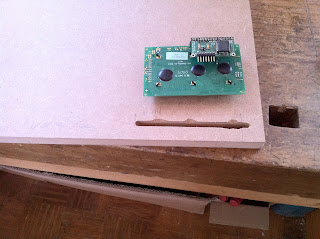 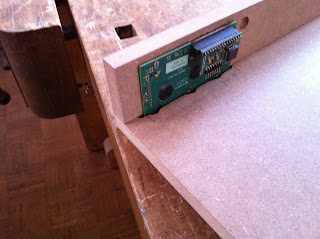 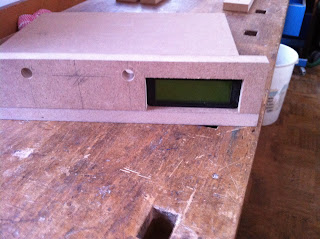 One thing, I wasn’t sure about were the bushings. Since they uses bush bearings in the original Mantis construction, I ordered some sintered bronze bushings together with the acme threads.

Despite all precautions and match drilling all holes for the precision rods, I wasn’t very happy with the results when first assembling the x axis. 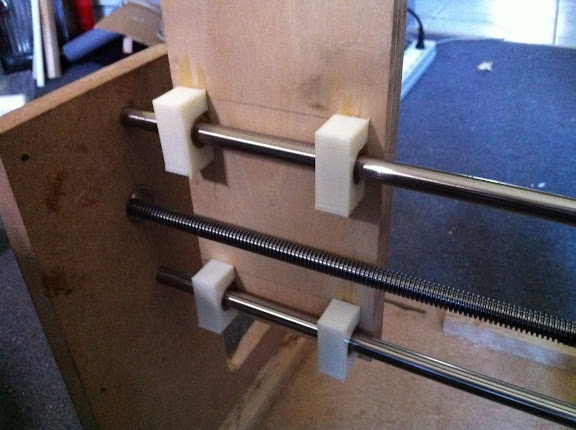 The slide was much too sluggish (see following video). So I decided to go back to proven mechanics and designed Mendel-style linear bearings for all three axis. 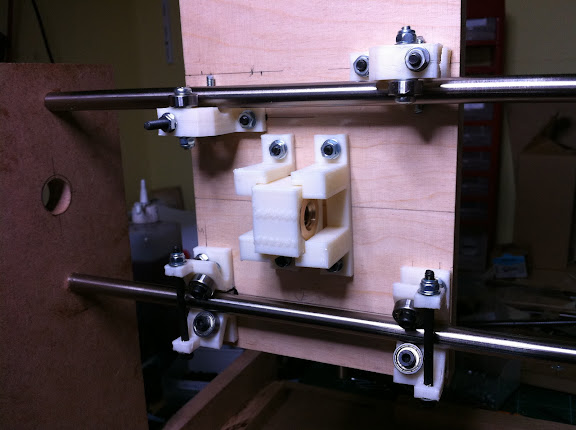 Since there isn’t too much room for the bearings (especially at the Z axis), I designed the printed ball bearing retainers as low profile as possible. The “inner” ball bearings are halfway sunk in the base plate. 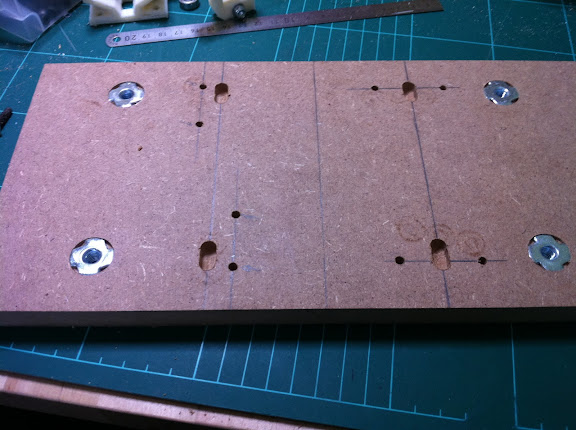 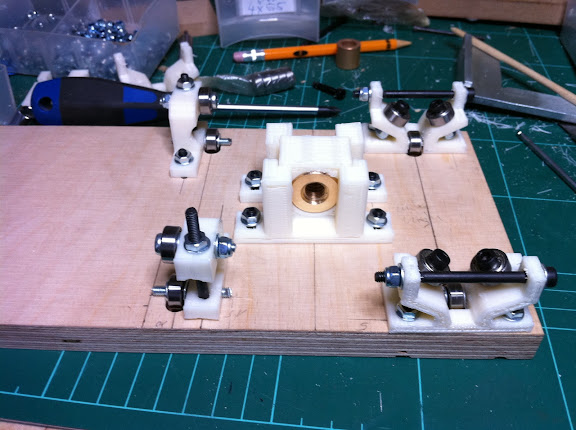 This not only keeps the assembly as low as possible, but also guarantees the same height reference for the fixed bearings (the axle sits directly on the plate). All upper bearings are adjustable.

Here’s a short video with a comparison of both bearing styles. I guess, bush bearings are only usable when the whole construction is manufactured by CNC machines…

The build platform is (same as in the Mantis construction) a sandwich of two boards of the same size. The linear bearings and the acme rod are attached to the lower board. That way, the upper board can be easily replaced in case of an accident or maybe if a heated build platform is needed in the future.

I drilled a grid of 4mm holes in the upper board, each with its own drive-in nut. The grid then can be used to easily attach a workpiece on the build platform by using scew clamps or directly bolting the piece down. 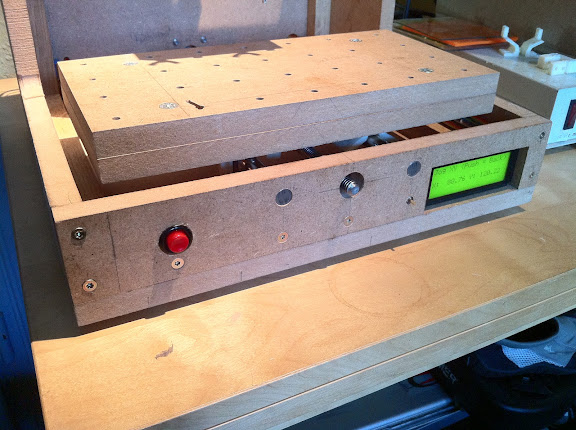 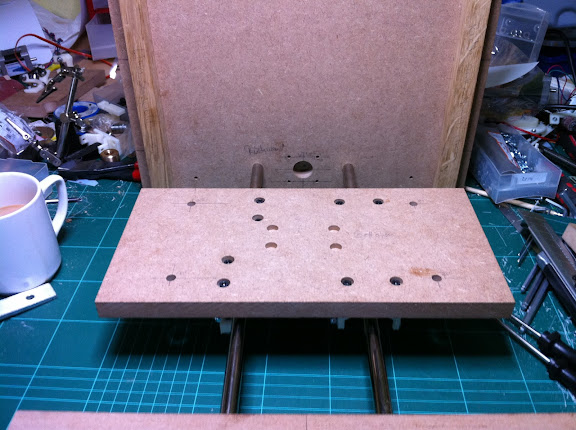 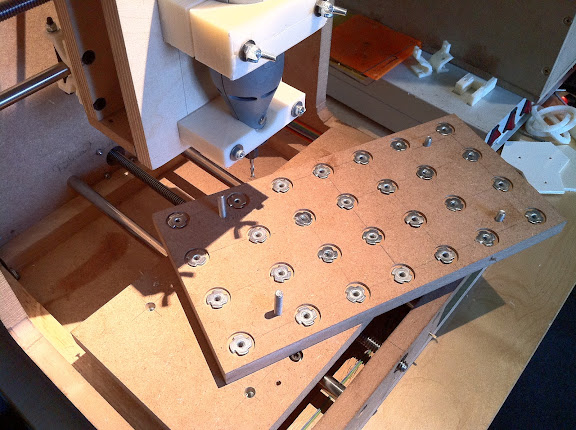 As spindle, I attached my Dremel to the Z stage. I printed an upper and lower clamp on my Makerbot Cupcake, which hold the Dremel gentle and tight on the Z axis. 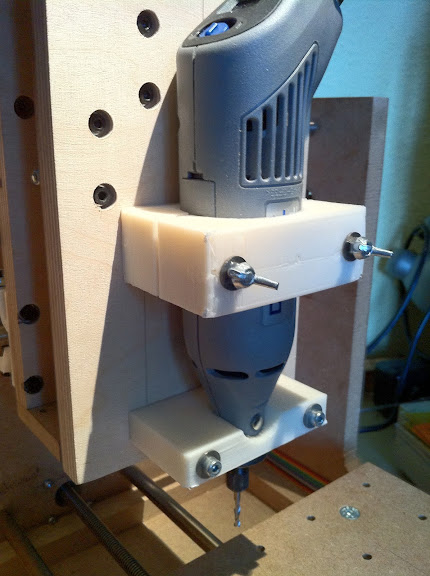 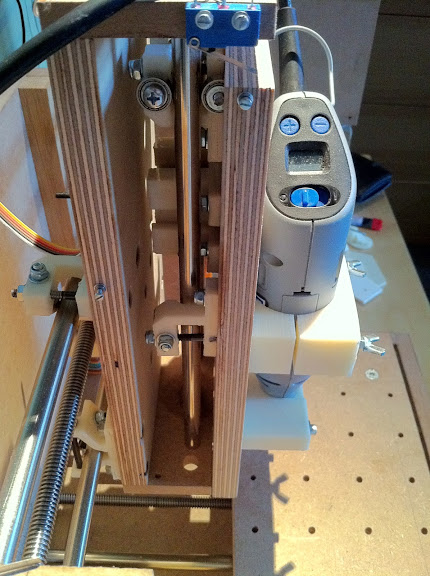 For a while I planned to use RAMPS electronics from UltiMachine to drive the three steppers (and any extruders in the future). But ever since I looked in the store, the PCB was out of stock. In addition to that, I already had a Seeeduino Mega lying around, which I liked to use for this job and which is not shield compatible with the Arduino Mega. Finally I needed some custom connections for the LCD, the joystick switch and the emergency stop button, I built into the mill.

So I decided to go for my own, custom RAMPS shield for the Seeeduino Mega.

Based on the open source design of the UltiMachine RAMPS electronics, I started to design the new Seeeduino shield. 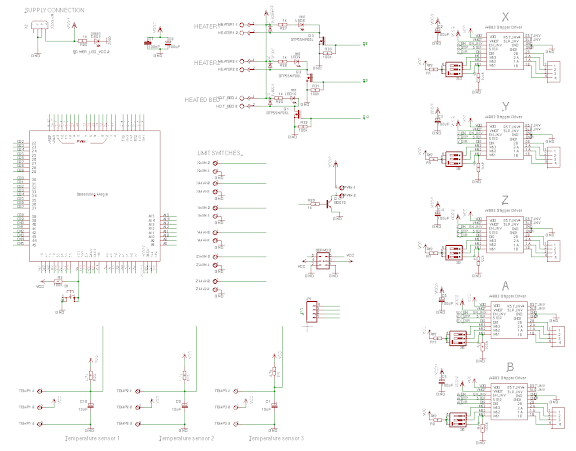 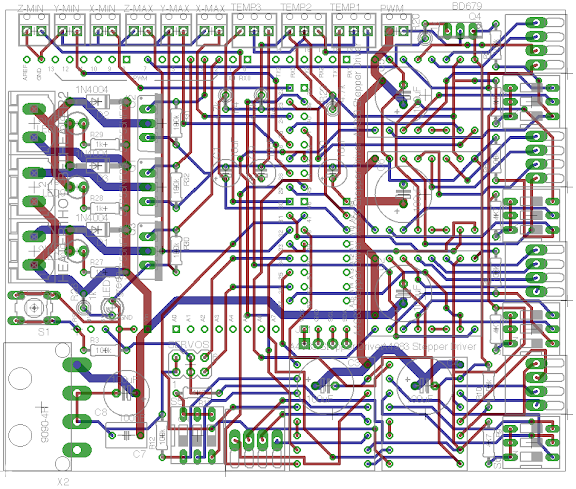 The board design is far from finished yet! Meanwhile I started to put the electronics onto a big breadboard on the backside of the mill. 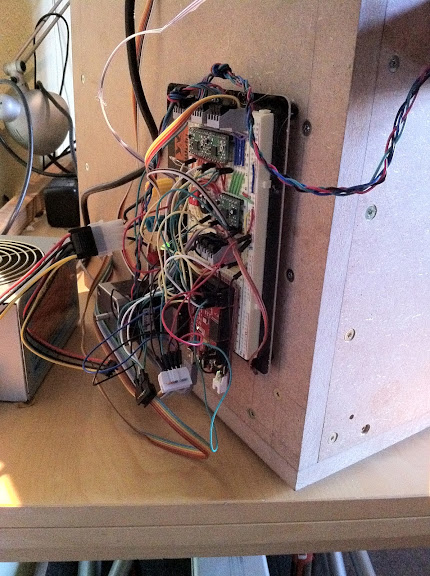 As soon as the circuits are working correctly and the schematics are fully tested, I’ll manufacture the final shield PCB. But this might still take a while and I’ll definitely write at least one other blog post about this topic.

So far, the breadboard contains only three Pololu A4983 boards for the steppers, as well as connectors for three endstop switches and some additional components for the LCD and switches.

I currently use mechanical endstops for the three axes. I’m still not sure if I’m happy with these. Maybe I’ll switch to opto endstops later, since I have the feeling, that they are much more accurate. 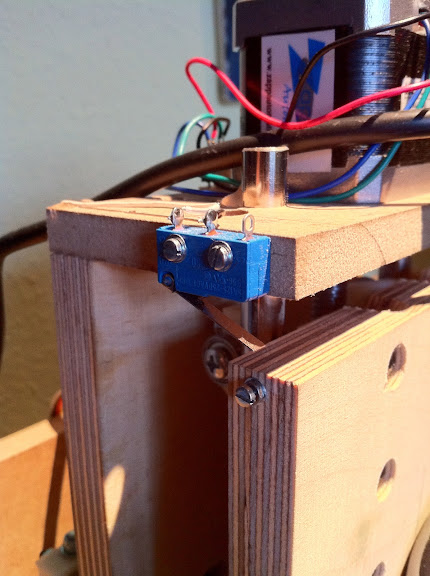 But it turned out quickly, that I’d need to make bigger changes to the firmware in order to implement some features I planned (e.g. jogging with the joystick switch etc.).

One thing came to another, I started to re-write some parts, added some code in the G-Code parser which is important for milling (G2, G3, G81 etc.). Then I started to throw out obsolete code and to redesign other code in order to implement stuff more object oriented…

Long story short, the firmware tuns out to be more based on the RepRap firmware than to be just an extended variant.

I have plans to go even further and to try to implement G41/G42 functionality (Cutter Radius Compensation). In order to do so, the G-Code parser needs a lot changes and extended functionality.

In order to keep my focus on the functionality important for milling, all 5D-extruder support is currently removed from the firmware. I’ll definitely add this code again later, when the milling code is working.

I’ll also publish my version of the firmware as open source, of course. But I’ll need some more time to further stabilize and clean up the code  before that. Please stay tuned.

Finally, here’s a video of the mill’s first real cut and a short demo of the LCD menu system of the current firmware:

I know, a CNC mill ain’t a laser cutter. But it’s as close as it gets for me in the foreseen future. Don’t get me wrong, I’m still happy with...