Besides 3D printing, I have recently started a new hobby: flying a RC Quadrocopter. To be more precise, flying a Quadrocopter with “FPV” (if you’re interested in what lured me into this, watch this video on YouTube…)

Anyway, since I’m relatively new to flying radio controlled stuff, I still crash the thing more than I fly it. Recently things really went out of control and I crash landed my Quadrocopter in a forrest, 450m away from its start position. 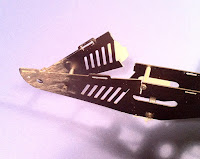 About 4 hours search time later (on the next day), my brother in law (who was part of  the little search party) found the crashed thing. Of course, since the (LiPo) batteries were (still) connected for about 24 hours, they were fully discharged (and thus damaged). Also the Quadrocopter’s props and frame were damaged. But on the bright side, we were able to recover all motors and the (rather expensive) electronics, including the FPV related stuff (AV transmitter, camera).

Although it might be possible to repair the broken original frame, I decided to rebuild the Quadrocopter from scratch. And of course, I printed all custom plastic parts on my MakerBot :)

There aren’t many parts needed for a Quadrocopter’s frame: It’s more or less just four arms with the motors attached to one end and a center plate on the other end, forming the typical X shape.

The center plate is also where most of the electronics are mounted: the Quadrocopter’s gyroscope controller (which stabilizes the whole thing when airborne), the battery pack and, of course, the RC receiver. The four ESCs (Electronic Speed Controllers), driving the brushless motors, are mounted directly on the arms (i.e. nearby the motors).

In my case, due to flying the whole thing with FPV, there is need for some additional electronic components: an AV transmitter, a camera and the OSD (On Screen Display), consisting of three  separate PCBs. The OSD isn’t mandatory for FPV, but it’s quite handy to see the battery’s remaining capacity, the Quadcopter’s GPS position and height and such, overlaid in the transmitted video.

So here’s the design I came up with: 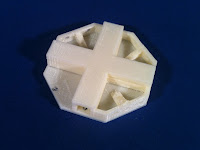 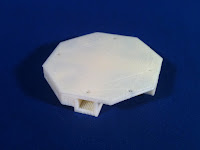 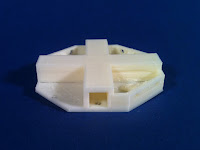 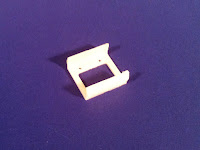 For the arms, I use 10x10mm wood profiles. It’s cheap, it’s light weight and it’s tough! 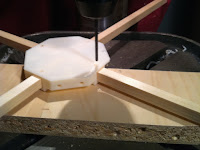 The motors are bolt to small platforms which are attached to the outer end of the four arms: 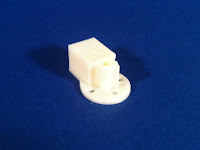 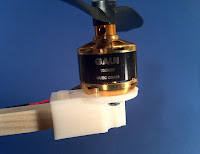 I used M3x20mm nylon bolts (not printed…) to secure the motor platforms.

The separate holders for the additional electronics (AV transmitter and OSD main PCB) are attached to their respective mounting places on the side and the back of the center plate. The RC receiver and the Gyroscope/Main controller are mounted on top of the platform with double-sided adhesive tape (the Gyro with additional rubber foam padding to reduce vibrations): 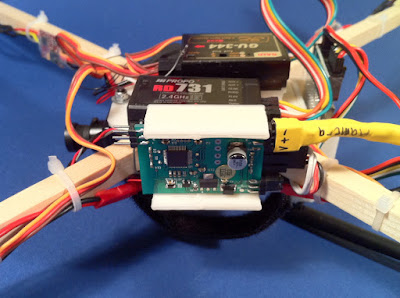 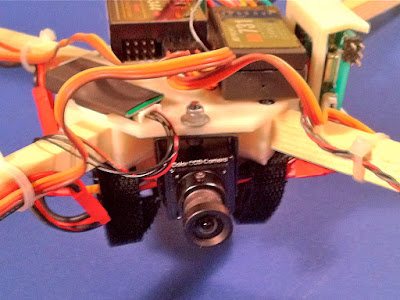 As mentioned before, the ESCs (which control the brushless motors) are mounted directly on the arms. So is the RC receivers additional antenna unit: 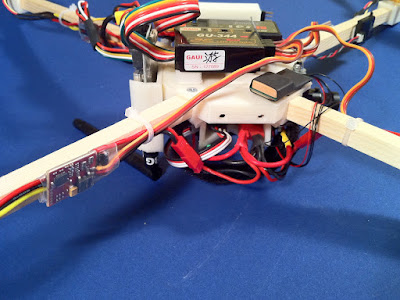 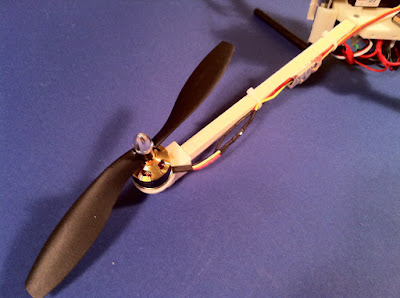 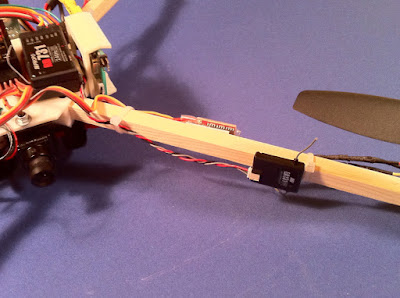 On the bottom side, you can see a x-shaped structure. This holds the third (and final) PCB of the OSD, containing the current measurement unit which allows the OSD to measure and display up to 50A current. The x-shaped holder and the velcro tape for later holding the battery pack are bolt down to the center plate with help of the four M3x25 bolts (see above). 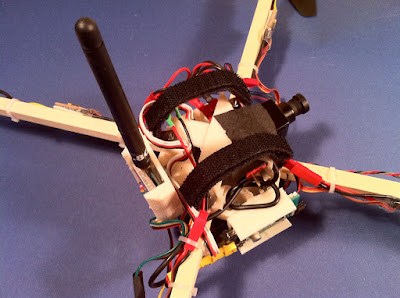 Well, that’s about it, so far: 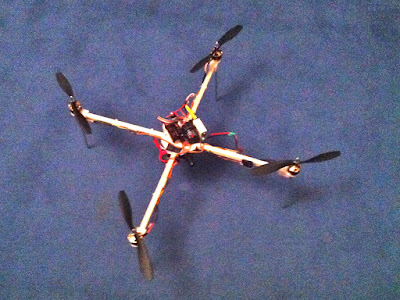 The feet in the above picture are currently simply four pieces of 6mm aluminum pipe. I plan to replace these by 6mm carbon rod, with nice, printed landing plates: 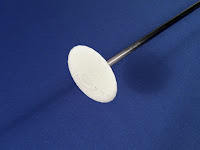 Unfortunately, these aren’t ready, yet. I’d like to build these with some kind of suspension in order to soften rough landings. But I’m still in process to design a simple, light weight and effective way to build this…

That leaves me with a last important question:

Will it blend fly?

The whole Quadrocopter, including the full FPV equipement, battery pack and preliminary feet weights only about 650 gramms, which is well under the theoretical maximum flying weight (including payload) of the original Gaui 330XS hardware. 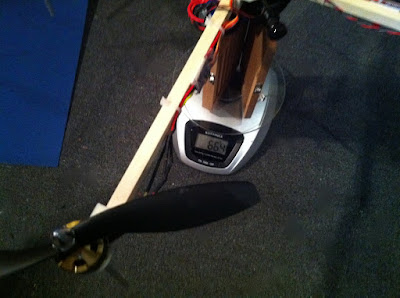 Unfortunately, it’s raining outside, so I couldn’t test it in the wild. But I couldn’t resist to do a short hovering test in my living room. You must know, that my living room is rather small and stuffed with furniture, so it’s kind of hard to do test flights there, especially for a not-so-experienced pilot as myself.

But see for yourself:

So far I’m quite happy with the results of 3D printing structural parts for a Quadrocopter. The parts are quite sturdy, yet light weight. And if  I’ll brake any part of the Quadrocopter in the future, the replacement is always just a quick print away!

Of course, I’ve published the designs of the printed parts on Thingiverse: http://www.thingiverse.com/thing:4812

Besides 3D printing, I have recently started a new hobby: flying a RC Quadrocopter. To be more precise, flying a Quadrocopter with “FPV” (if you’re interested in what lured me...