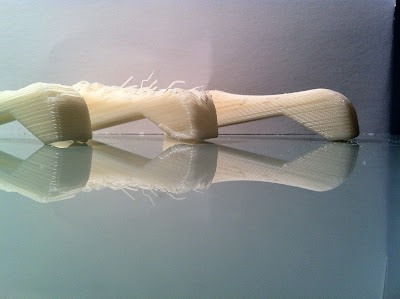 I need a tripod stand for my iPhone 4.

Fortunately, there’s a nice design for one of these, ready for download on Thingiverse: http://www.thingiverse.com/thing:4335

A minor problem with this object is, that Bradley Rigdon, the creator of this design, owns a couple of Dimension 3D printers. Since these professional printers automatically print with support material, large overhangs and such are no problem for them. And there are some large overhangs in the iPhone 4 tripod design…

Keen to experiment, I turned on the support feature in Skeinforge and sliced the downloaded STL (BTW, which needed resizing by factor 25.4, since the original STL was exported in inches). 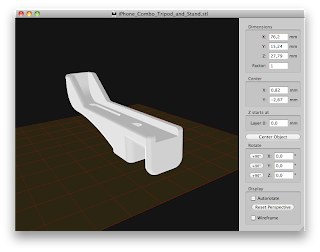 In the relatively old version of Skeinforge, I still use for several reasons (v2009-11-06), the support settings are part of the Raft preferences: 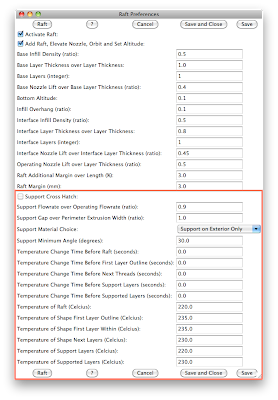 I printed the generated gcode in white ABS with my -more or less- standard MakerBot.

Removing the support structures after printing is relatively easy as long as you choose “Support on Exterior only” in the above settings.

Besides the relative coarse bottom side (which was likely more a problem with some Skeinforge settings unrelated to the support structure), the main problem with the printed object was the tiny wall on one side. You’ll know which wall I mean and what’s the problem when you compare the following picture with the object’s STL-screenshot above: 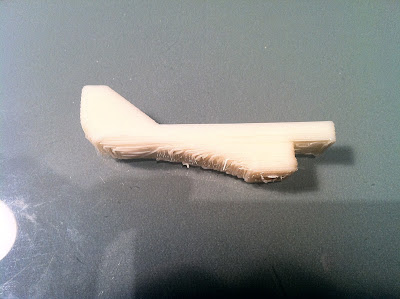 One thing I learned in the last year, printing 3D objects with my MakerBot: avoid printing single, tall, thin walls in upright position, unless you want to break them away later (intensionally or unintensionally…).

The missing wall on the above object broke away when I tried to attach the object to my iPhone for the first time.

The easiest solution for such a problem is usually to print the object “on its side”, i.e. rotate the whole thing by 90°: 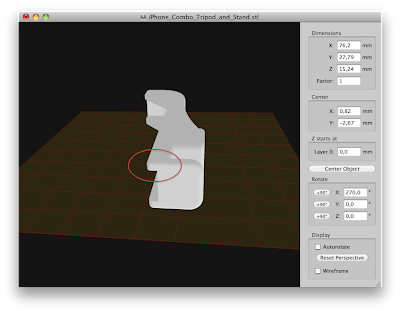 But in this case you’d run right into the next problem: Now you’d need to manage the 90° overhang (marked with the red circle). In order to use Skeinforge’s support structures for that, you’d need to switch the “Support Material Choice” setting to “Support Everywhere” (instead of “Support on Exterior only”). But removing those “inside” supports after printing isn’t easy and the support structures would likely degrade the surface of the rail on the upper side of the object, critical for the fit of the iPhone.

My solution for the dilemma was to print the object only slightly rotated: 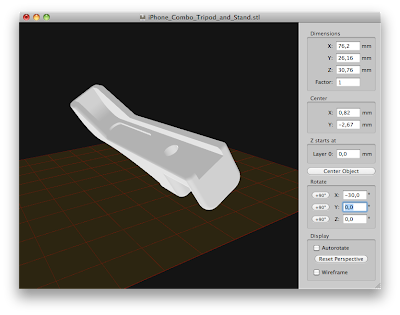 I started with 30° rotation from the upright orientation. Since I used support structures anyway, the weird angle shouldn’t be a problem to print. By choosing a rotation angle smaller than 45° the resulting additional overhangs of the former vertical walls shouldn’t need additional support (Skeinforge automatically don’t generate support structures for those overhangs; see “Support Minimum Angle” in the above settings).

By rotating the object, the iffy wall is now also sliced in an angle, which greatly improves its stability: 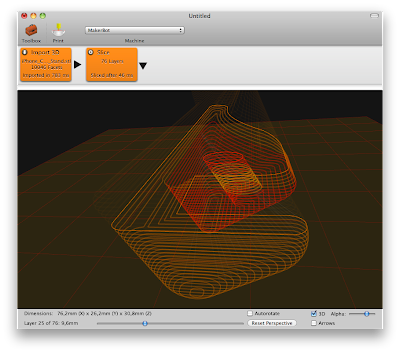 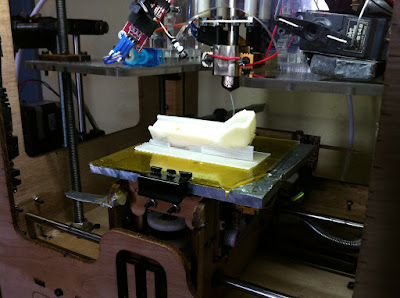 … and the stability of the printed object was indeed greatly improved. 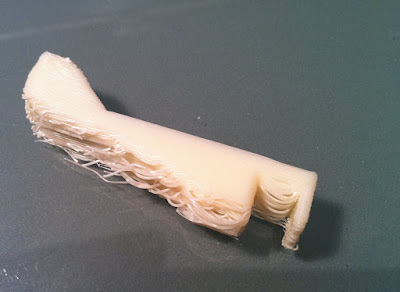 I did some additional adjustments in the Skeinforge settings: 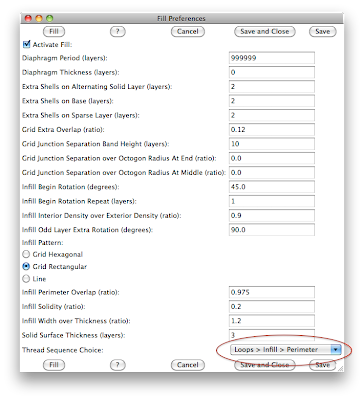 To give the curved lower part more plastic to stick on, I changed the “Thread Sequence Choice” (Fill Preferences) from the default value “Perimeter > Loops > Infill” to “Loops > Infill > Perimeter”.

I also reduced the rotation of the object from 30° down to 15°, which still should be enough to give the front wall sufficient stability: 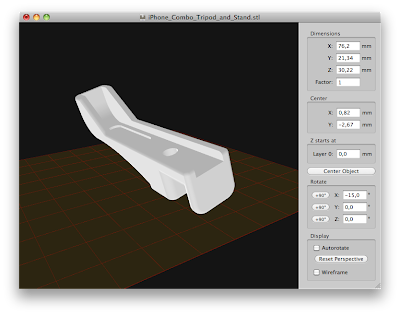 This time, the print looked good: 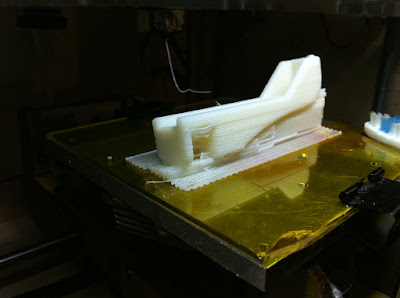 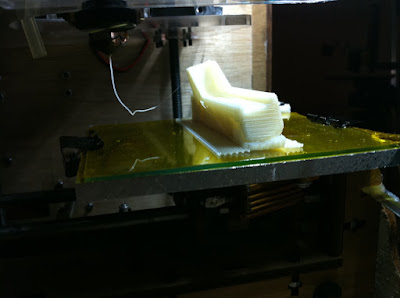 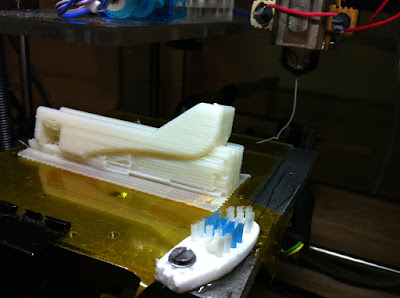 The refined settings seem to do the trick.

Here’s the printed part after breaking away the support material: 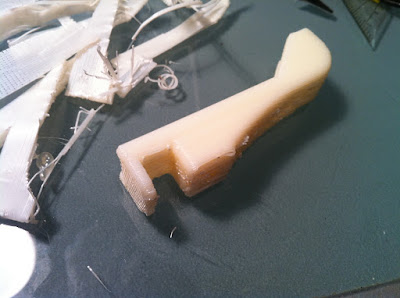 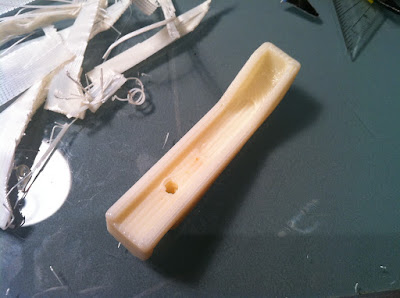 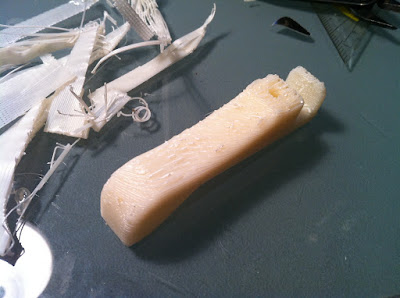 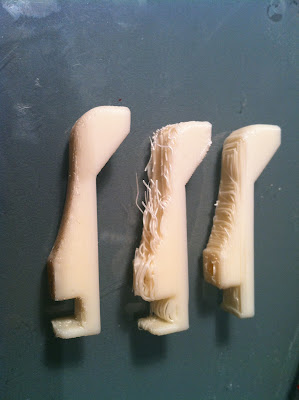 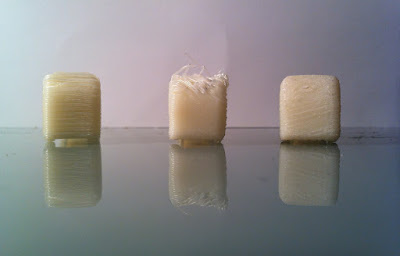 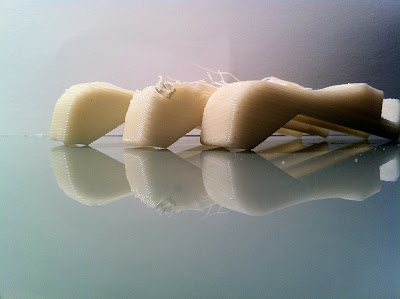 And now to an interesting question: Does the part work?

After the successful first test, I coated the whole thing with liquid rubber (Plasti Dip): 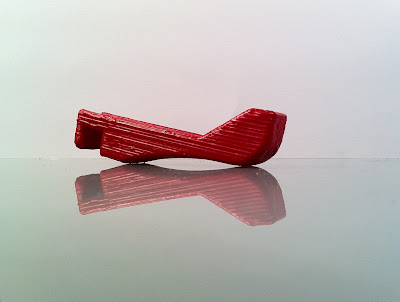 The rubber coating isn’t needed for grip (of the iPhone). But I thought, a little bit color couldn’t hurt. And also I like the rubbery texture on printed objects :)

I need a tripod stand for my iPhone 4. Fortunately, there’s a nice design for one of these, ready for download on Thingiverse: http://www.thingiverse.com/thing:4335 A minor problem with this object is,...