As you might know, I’m in the process of building a Mendel.

There are two reasons why it’s not printing yet:

On the software side, I still didn’t manage to bring the Reprap software to life on my Mac. After tinkering around with some Java frameworks, settings and class paths, I was eventually able to launch the host software. But somehow I wasn’t able to establish a connection between the host software and the RepRap firmware on the Mendel.

Right now, I switched back to the MakerBot firmware, in order to be able to use ReplicatorG to test drive Mendel’s mechanics. When I solved the remaining problems on the hardware side (see below), I’ll probably try again to use Mendel’s native RepRap firmware/software.

On the hardware side, I still don’t have a high torque NEMA 17 motor on my hands. However, I have a NEMA 17 stepper laying around. It’s the same cheap, low torque type, I’m using to drive the X,Y and Z axis.

This stepper is rated to provide a holding torque of only 0.23Nm, which is obviously too low for using it in a RepRap Thermoplast Extruder v2.0.

To grip the filament, I put a treaded pulley on the motor’s shaft. I built it on my lathe and tried keep the shaft’s diameter as low as possible: the pulley only adds 1mm to the motor’s shaft diameter, so it now has effectively 6mm diameter.

According to the rated torque, theoretically this motor should be able to pull the filament with about 76N (i.e. around 7.5kg on the balance).

But when I tried this setup, the motor started to skip steps at about 2kg on the balance (i.e. ~ 20N). That’s way to low, even for PCL filament. 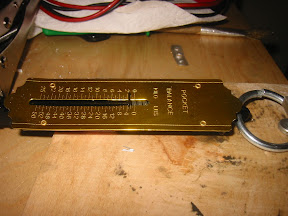 I guess, the main problem is, that I don’t use a real stepper driver to power the motor, but the RepRap/MakerBot extruder controller with the “2x DC motor drivers  -> stepper motor hack”. So the stepper motor probably doesn’t get enough current to produce it’s rated torque.

The obvious solution for this problem would be to buy a high torque stepper motor and/or use a well dimensioned stepper driver. Well, maybe I’ll eventually end up doing exactly this. But then again, I had this idea some time ago, when I lathed my first threaded pulley, to use one of these threaded pulleys as part of a worm gear.

I decided to first give this idea a shot…

Here’s the design, I came up with:

I drilled a 5mm hole in a piece of M8 threaded rod and added a set-screw, so it can be attached to the shaft of the stepper motor: 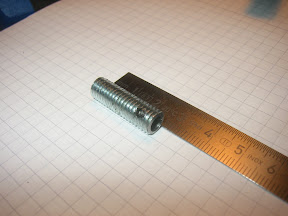 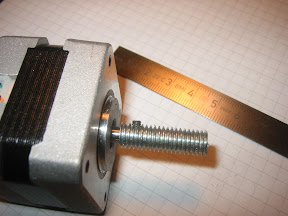 The central part of the gear box is the following part. It’s made out of brass and has two threaded grooves, one M8 (for the worm gear) and another one (M3) to grip the 3mm filament: 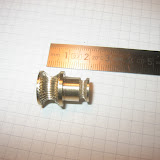 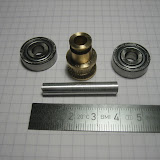 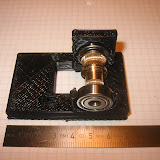 To press the filament against the M3 groove and to do the same to the M8 threaded rod and the M8 groove, the extruder contains two idler wheels. Each one is adjustable through a single M4 bolt. I already used this technique for my current Printruder design in my MakerBot: 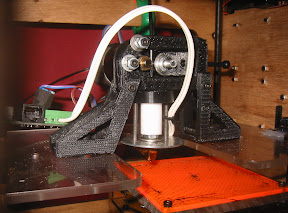 This design works quite well (… and I’ll publish the new and improved Printruder design, of course. As soon as it is fully tested…)

I lathed the idler wheels for both, filament and M8 threaded rod, as wheel rims for 624 ball bearings: 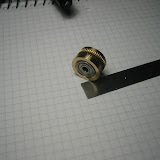 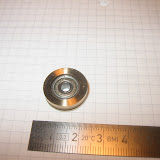 To keep the extruder’s housing simple (and rigid), I printed it in two parts, a plate which holds the motor and the gears and a frame for the idler blocks. I later glued (or better: welded, with Acetone) the two parts together. 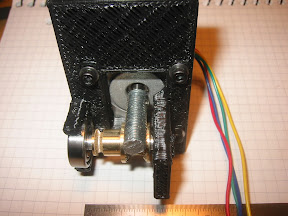 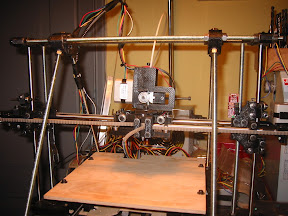 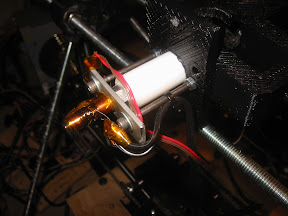 Finally I did a performance test with the completed extruder: 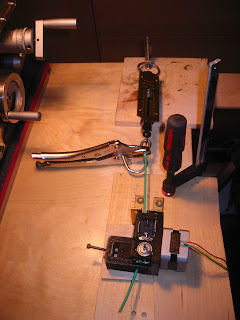 This time, the motor started to skip steps at about 9 kg on the balance: 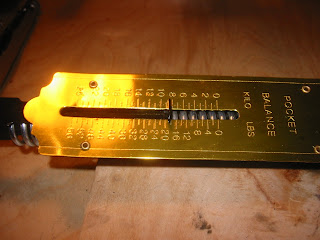 That’s definitely much more than the 2kg of the direct drive. But it might be still not enough for reliable use. The measured force of about 90N look even worse in account of the 1:33 gear reduction of the worm gear. I guess that most of the force is eaten by friction in the worm gear. Of course, the problem gets worse the more the M8 idler wheel is tightened. I hoped that tests would show, that the M8 idler wheel isn’t necessary (which not only would lower the friction but also would simplify the whole extruder design). But if it is too loose, the M8 threaded rod occasionally starts to skip threads.

To solve this problem, I’ll try to replace the M8 idler wheel by a 608 ball bearing on the free end if the M8 threaded rod.

I tried to use the extruder in a real world print on the Mendel (running with MakerBot firmware/ReplicatorG). Although, the XYZ-movement worked quite well, the extruder didn’t extrude the ABS continuously enough for a successful first print on my Mendel. So this milestone still isn’t reached. Either until I solve the problems with the worm gear extruder or I’ll finally order one of these high torque stepper motors…

As you might know, I’m in the process of building a Mendel. There are two reasons why it’s not printing yet: On the software side, I still didn’t manage to...