My Mendel is almost finished (at least the mechanical assembly). 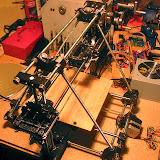 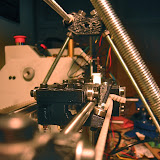 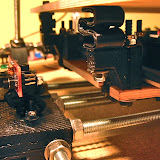 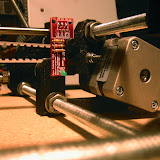 All printed parts were successfully printed raftless in black ABS on my MakerBot with heated build platform.

Although I’m quite fond of Mendel’s overall construction, I changed the design of a few parts.

For example: the timing pulleys. In order to attach an original timing pulley to the motor, one’s supposed to file two flats onto the motor’s shaft. I tried it on one motor and it was a pain in the ass. Maybe it’s all about the right tools, I don’t know. I used a full sized file and a vise, but I didn’t manage to get the flats right. In addition to that, I rather don’t do any irreversible modifications to expensive parts (i.e. stuff I have to order, like stepper motors). After all, once you messed up a motor’s shaft, you cannot use it anymore…

So I aborted my luckless attempts to get the drive shaft right and rather changed the pulleys’ design to have normal, round holes. I designed the holes to be exactly 5mm wide, but due to ABS shrinkage they turn out a little bit smaller. After cleaning the holes with a 5mm drill, the pulleys fit very snugly on the original motor shafts.

Since the force on the X/Y/Z axes aren’t that high, I’m pretty sure that the pulleys won’t slip on the shafts. And if they do, it’s probably much easier and more reversible to drill a hole for a splint pin through the whole assembly…

In order to keep the diameter as small as possible, I lathed the threaded pulley with an outer diameter of about 9 mm; with the 5mm hole for the shaft and a M3 thread groove, the pulley adds only 1 mm to the drive shaft’s diameter. Unfortunately, the steppers I have are way to weak for a Mendel’s extruder. So I hadn’t a chance to test the pulley in a working extruder yet.

If anybody has easy access to one of these high torque NEMA 17 motors and likes to send me one of these in exchange for one of my threaded pulleys, please feel free to contact me!! After completing the mechanical assembly, I’m now about to wire the whole thing up.

Which brings me back to my concerns on doing irreversible (or better: hard to undo) modifications on expensive parts: According to the build documentation, several “adaption” on the motherboard and other PCBs are needed.

Although I’m ok with desoldering the RJ45 connectors for the endstops on the stepper boards (I always found the Ethernet cables way to clunky for connecting the endstops…), I really don’t like the idea to remove the ATX power connector from the motherboard.

Besides the technical challenge and a childish “must-have” attitude, one reason for building a Mendel was (and is) to have a mutual backup for/by my MakerBot. That not only includes the convenience of being able to print replacement parts for the other machine, but also the to use the identical electronic hardware as a backup. By removing the ATX power connector from the Mendel motherboard, I’ll loose this advantage. And I’d rather not.

I hope I’ll find a way to use the unmodified motherboard in the Mendel (adding the I2C connector is ok, that’s adding, not removing…). There must be a way, maybe by doing a few firmware changes…

Does anyone have experience with this? Any help appreciated!

My Mendel is almost finished (at least the mechanical assembly). All printed parts were successfully printed raftless in black ABS on my MakerBot with heated build platform. Although I’m quite...